(Ed note: While there were many Detroit area Porsche enthusiasts at this year’s Lit Meet weekend, Tom Tate of Boston wrote about it in his blog and graciously allowed us to re-post it. Images are by both Tom Tate and Sebastian Gaeta)

While this winter in Boston has not been anything to run from, the idea of a gathering of the faithful in the 356 Porsche community on the left coast certainly loomed large on the calendar this year. Son, Rob, was going to drive over from Phoenix for his first visit to the annual festivities even if it was in a BMW. I figured that we could hide it behind the buildings and nobody would notice we were in the wrong type car. Wrong, a 550i with practically open exhaust was tough to hide anywhere. But what a great ride.
The 356 Literature and Toy Meet has been covered before in this column. I must admit it just gets better every year and 2016 was no exception. It’s not so much the literature, there’s a lot of that, or the toys, ditto, but spending time with old friends and hitting the shop tours that really make it a not to miss event.
The actual Meet is short, running from 7am to noon on Saturday, the tours go on for days. We even squeezed in a run to the Santa Monica City Pier to have lunch and see the sights the first day we were there. My brother, Bill, and I used to fish off that pier when we lived in Santa Monica before it became La La land. It was also the end of Route 66 after 2448 miles as the photo below shows.

Another beach stop was a place called Crystal Cove in Newport Beach which had all the look of a ‘50’s commune (see La La land above) but with a great spot on the beach for lunch. Cars had to be parked a mile away with a golf cart used as a shuttle since they didn’t want cars spoiling the aura of the place. I have to give them a tip of the cap as they did have car covers for the carts so they couldn’t be all bad. Besides the ocean view was the best.

Thursday night found us at Craig’s, the hot spot in Hollywood, with friends but we were disappointed to find that the Rave that we stumbled into two years ago was dark so we didn’t get to see the guys in the spray painted gold underwear this year.
The tours started in earnest on Friday morning, first stop, the Callas shop in Torrance to hear the first 911R built in 1967 fire up. We got a one hour lecture about the unusual car from Tom Prine the resident historian. He did a great job walking us through all the unusual features including the oil tank behind the passenger door where it didn’t show up again until 1972. And then only for a single year. He dispelled the rumor that it disappeared because too many gas station attendants mistook the flap for the gas tank cover. As with a lot of manufactures, even Porsche, it was all about the cost, in this case the tank itself and the labor to install it.
As noise and the smell of Castrol bean oil filled the alley it brought back memories of the Wintercross Series in Frederick MD in the ‘60’s as I watched a 911R outrun everything that showed up.

The presence of four 959 also provided a great photo opportunity especially the one on the lift that was being serviced. The undercarriage was covered in dirt and mud indicating that it was being used as the good doctor intended.
Lunch was served up at John Wilhoits shop, also in Torrance, as we walked between the cars that were undergoing restoration. The attention to detail was apparent and the shop was cleaner than the surgery unit at Mass General. Word was that there is a 3 year waiting list. Here are some shots of John’s shop: 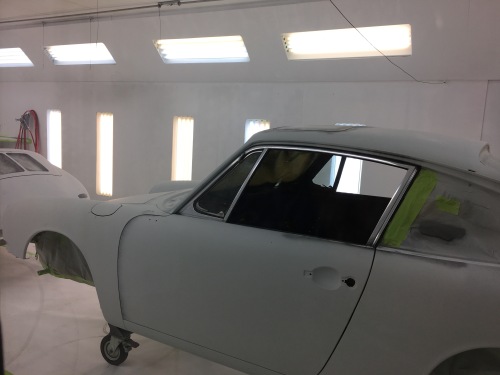 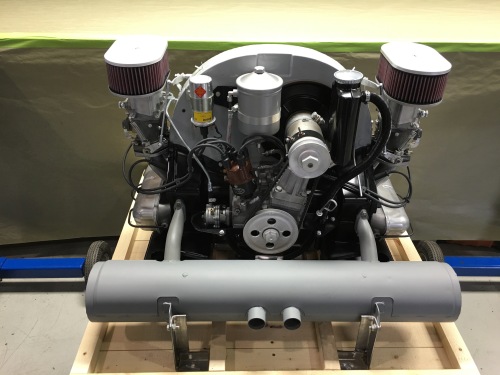 The next stop was the Auto Kennel, basically a consignment shop that had many cars for sale and couple of cars on display that two of our TYP356NE members were looking to purchase. One was a late model 911, the other a ‘70’s long nose 911. We did what all the old guys do, we picked them apart. Hopefully without hurting anyone’s feelings.
Friday night found the New England group making a lot of noise at the Rockin’ Fish in Newport Beach, just a block from the ocean. I don’t think anyone went for the New England clam chowder that was on the menus but the fish was great.
We stayed close to the Hilton since there was an early call on Saturday morning although a few of the younger guys were looking for some local action and apparently found it as they weren’t seen again until mid day on Sat. I had a table to cover with some parts and pieces that I had shipped into the hotel earlier in the week and didn’t want to miss any 7 am buyers. That worked out well and the cost of the trip got covered easily with parts sales.  The crowd was at least 30% larger than the last time we were out and the products available were really impressive. You can practically build a 356 with the parts and pieces currently available. 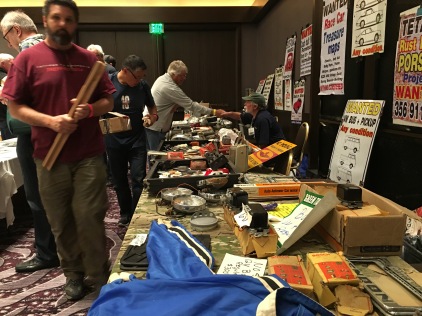 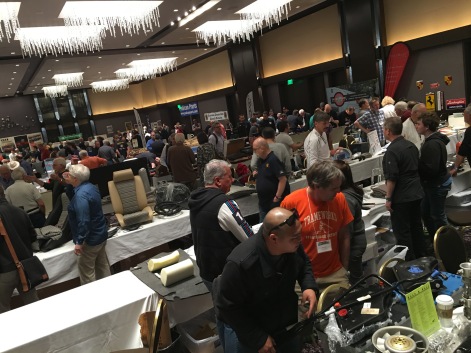 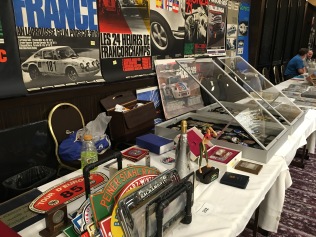 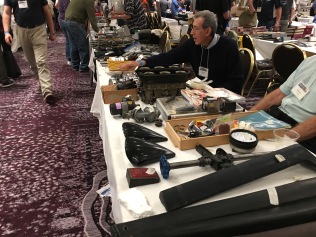 The afternoon was a short ride to European Collectibles in Costa Mesa for their annual open house that included a BBQ with more 356’s and early 911’s in one place than I seen in a while. There was a threat of rain (in Ca no less) but it didn’t appear until the next day. 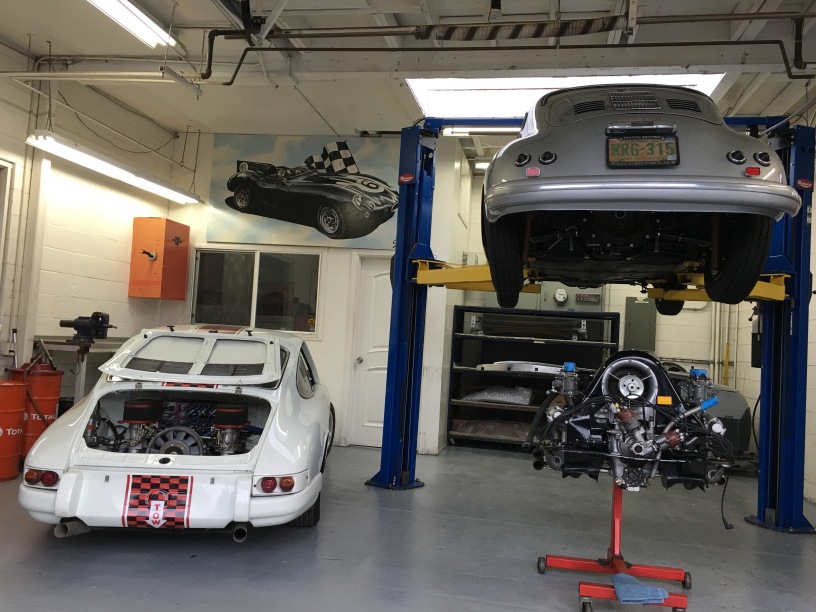 Above: European Collectibles. Below: Other various shops open after the lit meet. 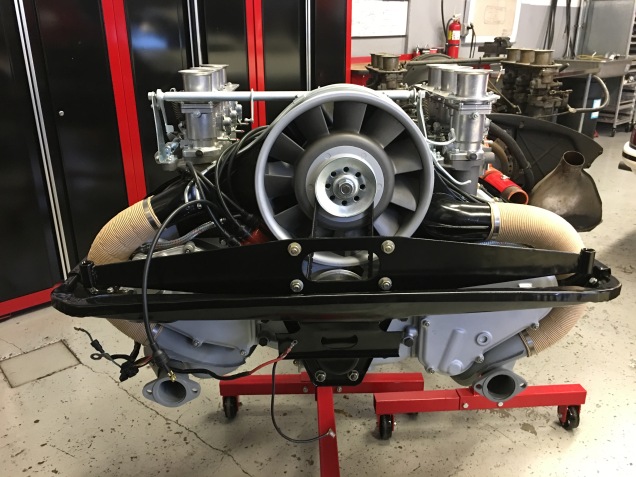 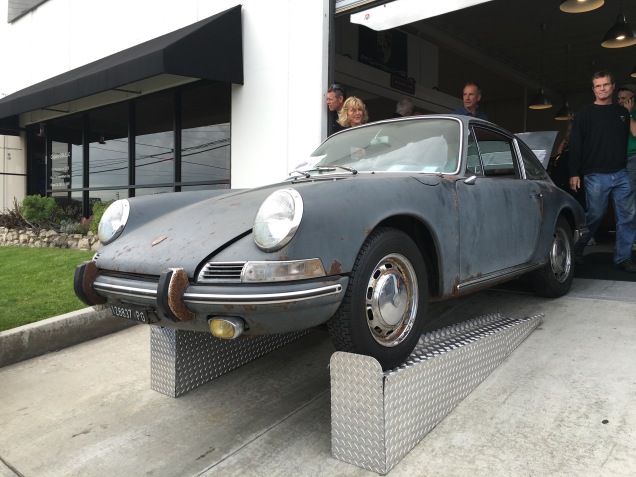 Two more open shops were just down the street so we got to see what Jim Liberty and his neighbor were working on, mostly early 911 work and very well done.
Sunday produced the scare of rain again but by the time we got in the BMW for a run to the All Porsche Swap Meet and Car Show in Anaheim the sun was out and temps were on the way to the high 70’s. I had picked up a rental as Rob would be leaving mid day to meet his family in Las Vegas. They were there at the beginning of school vacation week for soccer  matches for two of the boys.
Used parts in CA are cheaper and in much better condition than anything I see at Hershey every year and I couldn’t resist grabbing a few things that I knew would fit in my carry on bag and pass security. Like new window latches for the ’72 911 and a set of alloy wheel caps with enameled crests that found their way home with me. 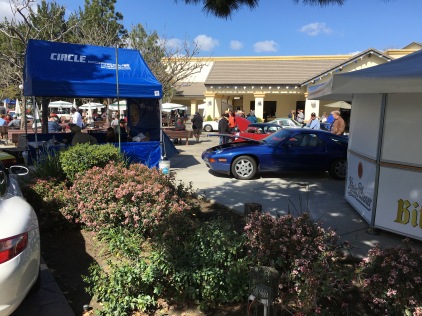 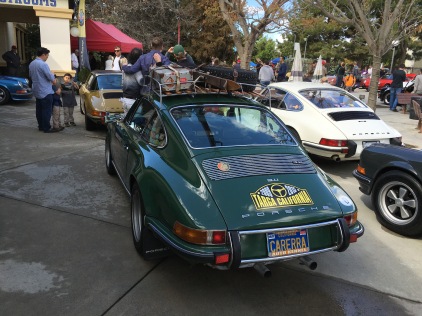 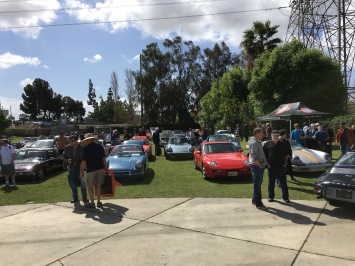 I rolled up the coast after a lunch with friends at Crystal Cove as I wanted to make a pass at the Topanga Canyon road and then come back out of the Santa Monica hills on Mullholland Dr. That’s a well known  road and an urban tale says that James Dean learned to drive his Speedster there.  Both roads are similar to the Tail of the Dragon in the Georgia mountains, real tight turns connected by short straights with great views of the valleys below.
Once on Mullholland Dr I came upon a newer Mercedes in my rental Toyota Camry. The driver was going to show me how his AMG sedan could drive away from a rice burner but of course I couldn’t let that happen. I had already wrung the little thing out on a couple of exit ramp so I pretty much knew how to make the tires scream and what the car would do when they started their song. Who knew that you can get oversteer out of a Camry? The short straight weren’t enough to allow him any space so I just dogged him all the way down into Hollywood. Great fun.
A couple of turns toward the coast and I was on Hollywood Blvd along with what look like every tourist in CA that wanted their photo taken on the Walk of Fame. Catwoman and Batman along with three versions of Mickey and Minnie Mouse were lined up getting $5 a picture. What a country.
Can’t wait until next year! KTF